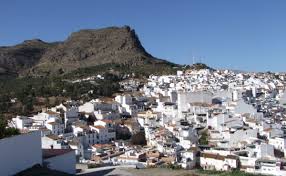 The small town of Alora is situated 40 kms north of Málaga by the road to Antequera and just 12 km south of El Chorro. From a distance, it is a typical pueblo blanco; a whitewashed village nestled between three rocky spurs topped by the ruins of a magnificent castle which has an interesting history. Alora's castle was first built by the Phoenicians and subsequently expanded under Roman rule. In the 5th century the castle was virtually destroyed by the Visigoths, only to be rebuilt under the Moors; remnants of this era still remain, namely the decorative steel door and the traditional Arab mirador.