The stunning Town of Montefrio is located in the Granada province of southern Spain. The ruins of a Moorish castle sits near the highest point. 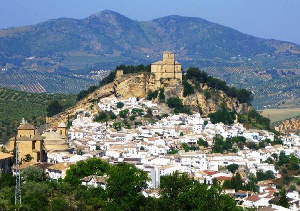 Being built midway between the Sierra de Priego and Sierra Parapanda, and commanding the open valley between these ranges, it became one of the chief frontier fortresses of the Moors in the 15th century.

The climate of Montefrío is a continental Mediterranean type. The economy is typically agrarian, with olives the main crop.
The relatively limited industry revolves around agricultural processing such as oil and dairy products. The population is reported as 6,688, with 3,337 men and 3,351 women.
Near the town is a vast archaeological site known as Las Peñas de los Gitanos, famous for its prehistoric tombs and remains of Roman and Visgothic settlements.